Shopping Cart
Your Cart is Empty
Quantity:
Subtotal
Taxes
Shipping
Total
There was an error with PayPalClick here to try again

Thank you for your business!You should be receiving an order confirmation from Paypal shortly.Exit Shopping Cart

Baltimore RNLI held a special ceremony on the North Pier on Sunday 8 September which saw the station receive a Vellum (Inscription of thanks from the Institution) marking one hundred years of saving lives at sea and the naming the new Atlantic 85 lifeboat Rita Daphne Smyth.

Crowds turned out to witness the occasion and acknowledge the service of the men and women who throughout the last ten decades have seen Baltimore RNLI launched 940 times and rescue 867 people.

The new lifeboat was officially named exactly 100 years on from the day the first lifeboat The Shamrock, arrived in the West Cork coastal village. It will work alongside the station’s All-Weather Tamar lifeboat, Alan Massey. The new inshore lifeboat has been funded by a generous legacy from the late Rita Daphne Smyth and replaces the station’s Atlantic 75 class lifeboat Alice and Charles.

The Atlantic 85 is powered by two 115 horsepower engines and has a stronger hull and greater top speed than her predecessor. The added radar allows the crew to operate more effectively in poor visibility and she also has VHF direction-finding equipment. The vessel also has a manually operated self-righting mechanism which combined with inversion-proofed engines, keep the lifeboat operational even after capsizing. The lifeboat can also be beached in an emergency without causing damage to its engines or steering gear.

During the ceremony Mr. Hugh Tully, a member of the RNLI Irish Council and former Commodore of the Irish Naval Service, presented Coxswain Kieran Cotter with a 100th anniversary velum. Kieran accepted the velum on behalf of all past and present members of Baltimore RNLI. On presenting the award Hugh recounted some of the outstanding rescues carried out by the lifeboat crew in Baltimore throughout the years. These included the Fastnet disaster of 1979 where the Baltimore RNLI rescued the crews of Regardless and Marionette in force 10 winds and 40-foot seas. Other memorable callouts included the rescue of former Taoiseach, Charles Haughey, when his yacht Celtic Mist sank at Mizen Head in October 1985, the callout which saw the crew battling challenging conditions when a RIB capsized and sixty bales of cocaine were left in Irish waters and the Rambler rescue where seventeen crew were rescued from the upturned racing yacht.

Speaking after receiving the velum Kieran Cotter Baltimore RNLI Coxswain added, ‘We have had volunteers from our local community who have crewed the lifeboats here for the last one hundred years. This would not have been possible without the support of the local community, crewing the boat and funding the lifeboat service here. Like all lifeboat stations, here in Baltimore we take immense pride in what we do, how we do it, in our boat and in the lifeboat station. We are only the current custodians of the lifeboat service here. On behalf of the present station personnel we would like to thank the community for supporting the life-saving service over the past one hundred years.’

The lifeboat was accepted into the care of the station by Tom Bush, Lifeboat Operations Manager and was named from the end of the slipway by Richard Bushe, former Deputy Launching Authority and Honorary Secretary of the Baltimore Lifeboat station.

Declan Tiernan, Chairman of Baltimore Lifeboat Station ran the proceedings and spoke about the changes at the station over the previous century. In his speech he paid tribute to all lifeboat crew who have been involved with Baltimore RNLI over the last one hundred years, ‘We recognise a lot of the names from the very first lifeboat crew as we have a lot of their descendants with us today. The one constant over the last one hundred years are the people who served as crew of the lifeboat. They were the same type of people who are here today, serving with the same dedication and commitment to saving lives at sea.’

When in 1919, the RNLI put a lifeboat in Baltimore, it was the fourth County Cork station. Since then, Baltimore RNLI lifeboats have launched more than 940 times and their crews have rescued 867 people including 280 lives saved. The Shamrock remained in service until 1950 when a new Watson class lifeboat Sarah Tilson was placed on service.

In April 2008, a second lifeboat, an inshore Atlantic 75 called Bessie was placed on service at the station to complement the existing all-weather lifeboat. In February 2012 a new Tamar class lifeboat Alan Massey replaced the Hilda Jarrett.

In July 2013 a complete refurbishment of the lifeboat house was finished, leaving the station with state-of-the-art facilities.

The station was established by the Institution in 1919. A masonry lifeboat house and slipway was erected at Bull Point at a cost of £2,765.

Silver Medals awarded to The Venerable Archdeacon J R H Becher, Honorary Secretary at Baltimore and Lieut. A L Sanderson RNR for a service on 29 December 1916 when the ss Alondra of Liverpool carrying a crew of forty, ran ashore on the Kedge Rocks in dense fog and bad weather. Sixteen men took to a ship’s boat and were drowned and one man died on board. The remaining 23 were rescued by means of lines.

Silver Medals awarded to John Daly, Tim Daly, Michael Cadogan and Tim Cadogan for putting off in a small boat and rescuing two of the crew of the ss Nestorian, which ran ashore at Cape Clear Island in a dense fog and a very heavy westerly swell on 2 January 1917. The life saving apparatus was carried two miles over a mountain to the wreck.

Silver Medal awarded to John Hart and the Bronze Medal to Timothy Murphy and Jeremiah McCarthy for their gallant conduct when they saved five people from the fishing boat Thomas Joseph of Dublin, which was wrecked in a strong north west wind, with a very heavy sea, on Skirkin Island on 10 November 1918. The boat was on a trial trip with 11 people on board when she struck some rocks and six were drowned. The rescuers put off in a yawl and rescued, at great personal risk, three men who were clinging to the mast and a man and a girl from the rocks.

In 1979, a special framed certificate awarded to the coxswain and crew for display at the station in recognition of their services in connection with numerous yachts in difficulties during the Fastnet Race on 13/14 August.

Adaptation work was carried out in order to accommodate the station’s Tyne class lifeboat.

In 1992, a Bronze Medal awarded to Coxswain Kieran Cotter in recognition of his determination, skill and fine seamanship, and Framed Letters of Thanks signed by the Chairman of the Institution to Assistant Mechanic Vincent O’Driscoll and crew members Ronald Carthy, Michael O’Regan, Aidan Bushe and Cairán Sweeney for their support, when the lifeboat The Good Shepherd, on temporary duty at Baltimore, rescued 15 people and saved the Spanish fishing vessel Japonica which had suffered engine failure 20 miles west of the Fastnet Rock in storm force winds on the night of 30/31 October 1991. As the casualty was driven closer to the rock-bound shore, it was decided to attempt a tow. This was finally achieved after 70 minutes, and the vessel towed with some difficulty to the safety of Bantry Bay. On the return passage the lifeboat put into Castletownbere to land an injured crew member and to change a blocked fuel filter. Whilst waiting for a replacement the lifeboat received information that the yacht Atlantis Adventure was in difficulties south of the Fastnet Rock. The lifeboat was at sea for a period of 26 hours. The Maud Smith Award for the bravest act of life saving in 1991 was made to Coxswain Kieran Cotter for this service.

In 2008, Atlantic 75 class lifeboat, B-708, Bessie, was placed on service on 27 June for evaluation and subsequently went into service.

The new station lifeboat ON1302 Alan Massey was placed on service on 15 February 2012. This lifeboat was funded by the generous legacy of Miss Dorothy May Massey in memory of her brother. The lifeboat ON1137 Hilda Jarrett has been withdrawn to the relief fleet.

The new Atlantic 75 lifeboat B-753 City of Bradford was placed on service 8 October 2012. Lifeboat B-708 Bessie has been withdrawn.

The new station Atlantic 75 B-760 Alice and Charles was placed on service September 2013. Lifeboat B-753 City of Bradford has been withdrawn.

Seven Silver and three Bronze Medals have been awarded. The last voted 1992. 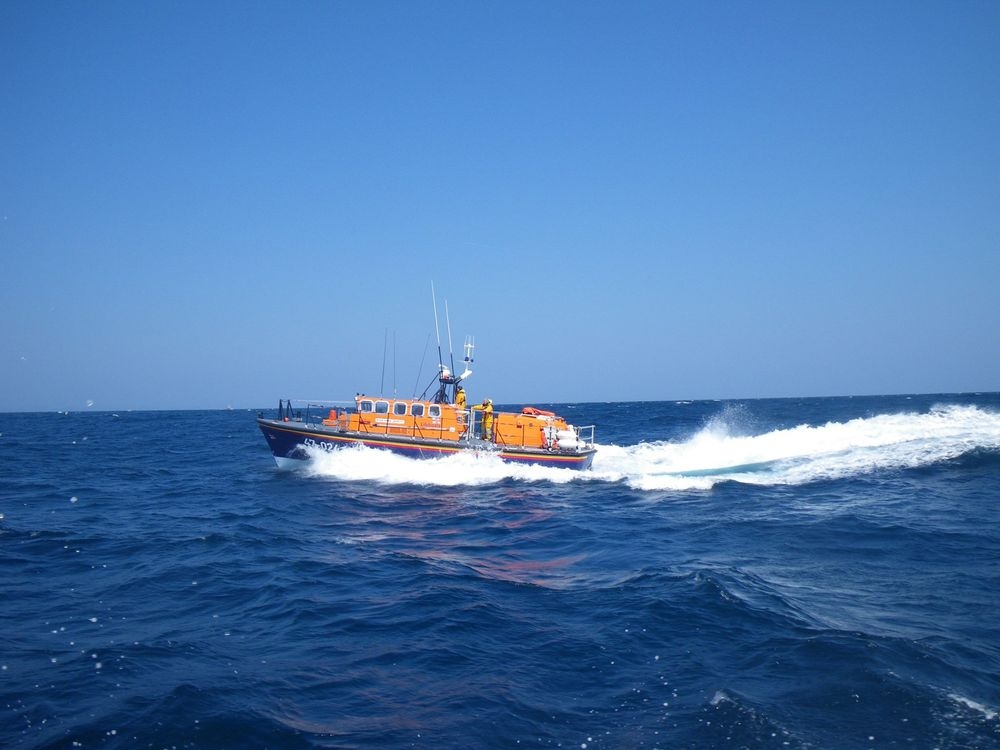 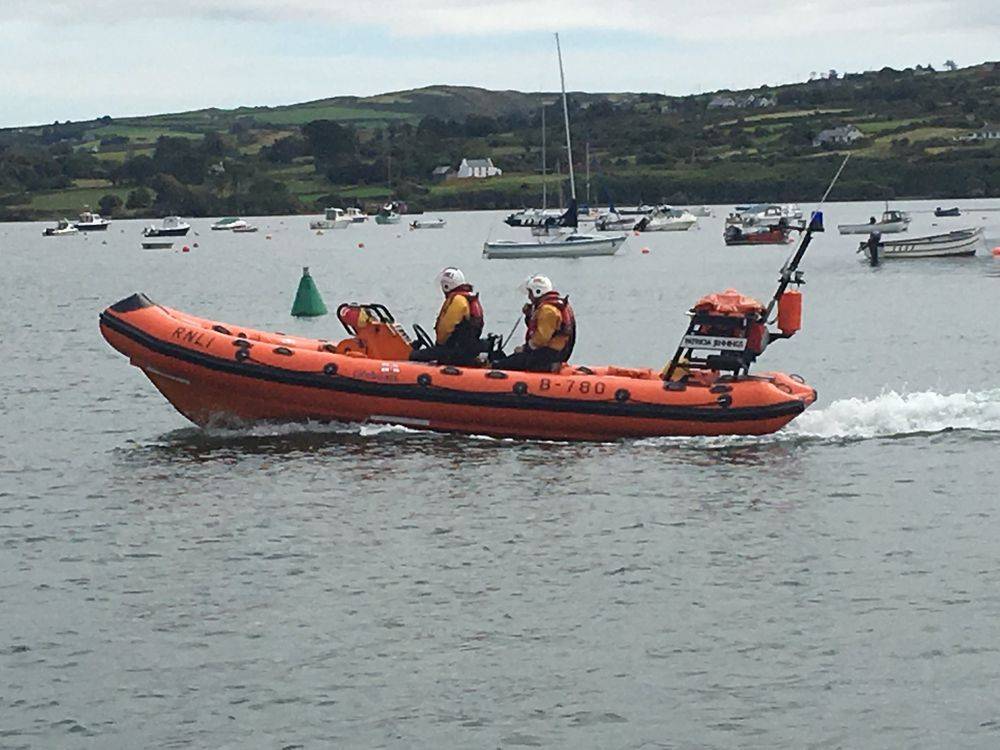 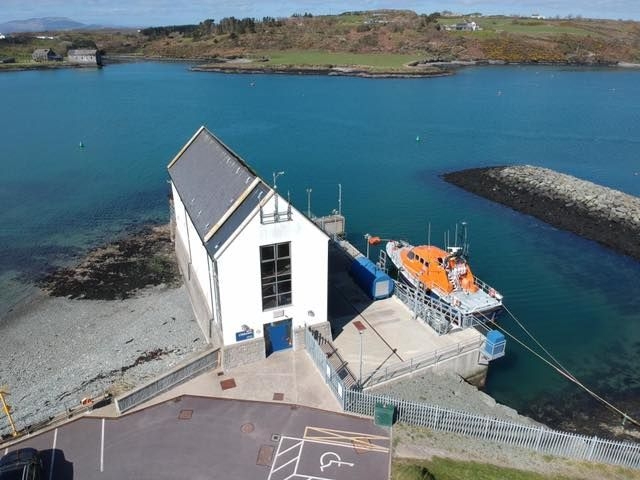 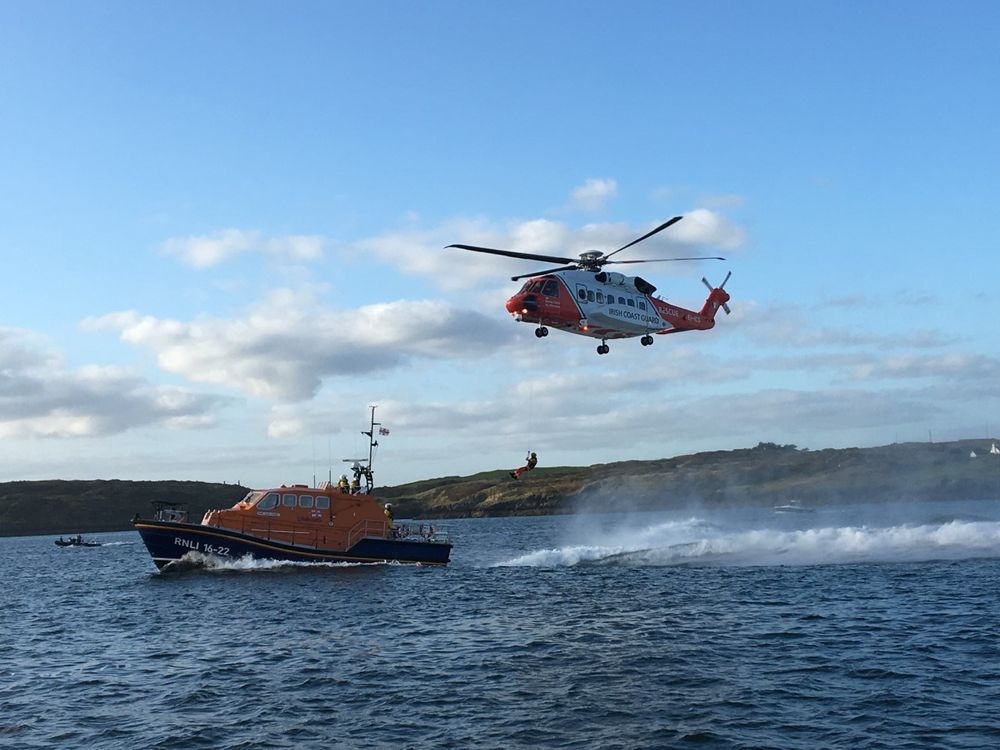